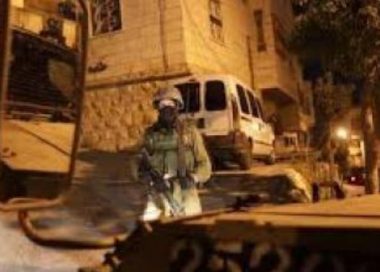 Dozens of soldiers invaded Tulkarem city, in northern West Bank, before storming the home of Legislator Fathi Qar’awi, ransacked them property and interrogated him along with his family.

The soldiers also invaded Jabal an-Nasr, in Nour Shams refugee camp, in Tulkarem, before breaking into and searching the home of Fathi Qar’awi, and occupied his property for several hours before withdrawing.

The soldiers abducted Mohammad Mo’in Tabanja, from his home in Rafidia neighborhood, and Haitham Mahmoud al-Akka, from Khallet al-Amoud area.

It is worth mentioning that Tabanja is the brother of two young men, who were recently abducted by the army.

In related news, the soldiers conducted extensive searches of homes and buildings in the al-Hadaf area in Jenin refugee camp, in the northern West Bank city of Jenin, and caused many Palestinians to suffer the effects of teargas inhalation during ensuing protests.

Many army jeeps also invaded Azzoun town, east of the northern West Bank city of Qalqilia, and fired many gas bombs and concussion grenades at protesters and many homes.

The soldiers were also heavily deployed in the Tihta neighborhood in the refugee camp, while army drones flew overhead.

In Ramallah, in central West Bank, the soldiers invaded Umm Safa village, northwest of the city, searched homes and interrogated many young men while inspecting their ID cards.