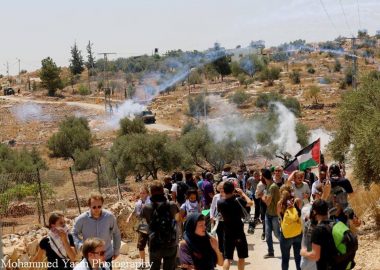 Israeli soldiers attacked, Friday, many nonviolent Palestinian, Israeli and international peace activists in Bil’in village, west of the central West Bank city of Ramallah, after the army attacked the weekly procession against the Annexation Wall and Colonies.

The procession started from the center of the village, heading towards the Wall, near Abu Lemon area, before the soldiers started firing gas bombs, concussion grenades and rubber-coated steel bullets at them.

Many Protesters suffered the effects of teargas inhalation, and received the needed treatment.

The media coordinator of the Popular Committee against the Wall and Colonies in Bil’in, Abdullah Abu Rahma, said the procession this week was in solidarity with the al-Khan al-Ahmar Bedouin community, facing demolition and displacement.

Abu Rahma added that the protest also comes in rejection to the so-called “Deal of the Century” plan of U.S. President Trump, and his hostile policies towards the Palestinians, their rights and their struggle for liberation and independence.