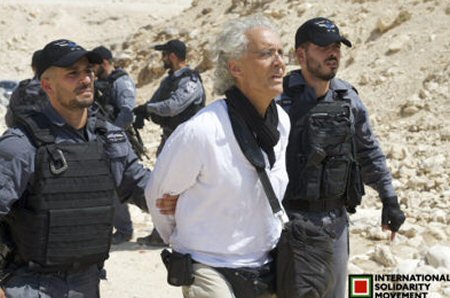 Israel is determined to expel the foreign law professor detained Friday, on suspicion of disrupting the actions of Israeli soldiers on duty, at the Bedouin village of Khan al-Ahmar, which is facing imminent demolition, according to Israeli media.

Frank Romano, 66, who holds both French and American citizenship and teaches law in France, was arrested according to military rather than civilian law and was not brought before a judge, Haaretz reported, according to WAFA.

Romano declared a hunger strike on Friday evening, following his detention by the Israeli police at Khan al-Ahmar village, east of Jerusalem in the central West Bank.

Romano has been supporting residents of Khan al-Ahmar for the past several days, since the beginning of an open sit-in at the village, following the Israeli High Court’s approval of demolition.