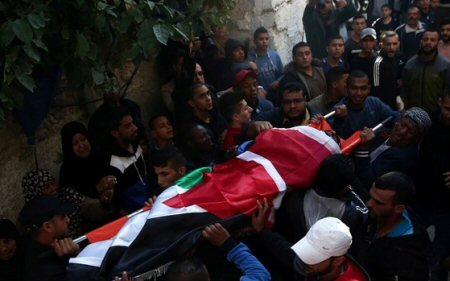 Crowds of Palestinians marched in the funeral of Mohammad Husam Abdul-Latif Habali, aged 22, at noon on Tuesday, in Tulkarem City of the northern occupied West Bank.

Habali is a disabled man who worked at a coffee shop in the city until the late night hours. He was shot and killed by Israeli forces , predawn Tuesday, with a rubber-coated steel bullet to the leg before a second shot to the head, causing a critical injury.

Hundreds of Palestinians carried Habali’s body on shoulders from the Thabet Thabet Hospital, in Tulkarem City, where he was pronounced dead, to his family home before burial took place at the al-Shuhada cemetery in the city.