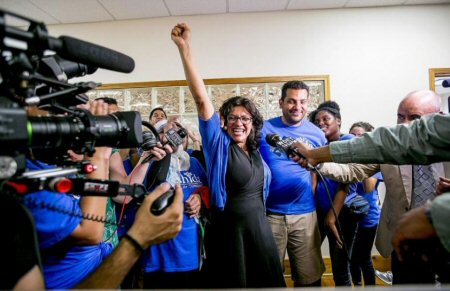 US Democratic Representative-elect Rashida Tlaib plans to lead a delegation of American lawmakers to the West Bank, the congresswoman-to-be has told the Intercept.

Tlaib, a Palestinian-American, told the publication that the delegation will focus on “Israel’s detention of Palestinian children, education, access to clean water, and poverty” and that the goal is “to humanise Palestinians, provide an alternative perspective to the American Israel Public Affairs Committee pushes.”

She also wanted to “highlight the inherent inequality of Israel’s system of military occupation in Palestinian territories, which is similar to what African-Americans in the United States endured in the Jim Crow era.”

Tlaib was “rejecting [the] Israel lobby’s influence over Congress” echoing and that her plan was a “rebuke of a decades-old tradition for newly elected members: a junket to Israel sponsored by the education arm” of AIPAC.

She has no plans to meet with any Israeli or Palestinian officials, said the report.

“I want us to see that segregation and how that has really harmed us being able to achieve real peace in that region,”Tlaib said. “I don’t think AIPAC provides a real, fair lens into this issue. It’s one-sided. … [They] have these lavish trips to Israel, but they don’t show the side that I know is real, which is what’s happening to my grandmother and what’s happening to my family there.”

AIPAC’s education arm has reportedly spent $12.9 million on trips to Israel for legislators and staffers over the past decade, trips that the publication called “among the lesser-known traditions for freshman members of Congress.”

Tlaib said that she personally supports the movement to boycott Israel. She has previously called on the United States to cut military aid to the country.

Before Tlaib won her primary in August, her campaign represented her as supporting a two-state solution and.

On the eve of the primary, Steve Tobocman, a senior adviser to Tlaib, told Haaretz that she supported a two-state solution.

Representative-elect Ilhan Omar has also come out in support of boycotting Israel in remarks after her election. She has also drawn criticism for calling Israel an “apartheid regime” that had “hypnotised the world” to ignore its “evil” policies.

In November, Tlaib and Omar became the first two Muslim women to be elected to Congress.