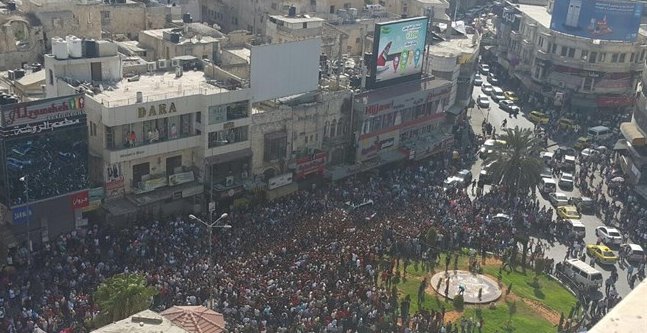 Ahmad Izz Halaweh was a leader in the al-Aqsa Martyr’s Brigade, the armed wing of the Fateh party.

During the funeral on Sunday afternoon, the mourners gathered outside Rafidiya Hospital, where Halaweh’s body was being held, and followed the pallbearers carrying Halaweh’s body to the eastern cemetery in Nablus.

They chanted, and called for the resignation of the Governor of the Nablus district, Akram Rujoub, for allowing Halaweh to be killed. They also called for justice for the death of Halaweh, and for those who carried out the killing to be arrested. Flags from both the Hamas and Fateh parties were seen among the mourners.

Halaweh was allegedly beaten to death in prison on August 23rd by Palestinian security officers.

Photos of his beaten and swollen head and body were leaked on social media, and led to outrage around the world, including a condemnation by the United Nations of what it called an extrajudicial assassination.

On August 19th, two Palestinian security officers were killed, and several people, including Halaweh, were arrested in the several days following that attack, under suspicion of involvement in the shooting.

But when he was taken into custody, Halaweh apparently resisted the questioning and interrogation, and was beaten repeatedly by the Palestinian officers.

The Palestinian Authority has announced that they will carry out a full-scale investigation into the apparent beating death, but no details of that investigation have been released.