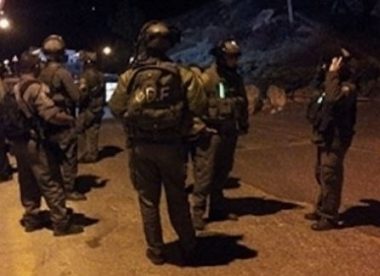 The Palestinian Prisoners Society (PPS) has reported that Israeli soldiers kidnapped, on Monday at dawn and late on Sunday at night, at least ten Palestinians in different parts of the occupied West Bank. Two fishers were also kidnapped in Gaza territorial waters.

The Nablus office of the PPS, in the northern part of the occupied West Bank, said the soldiers invaded the towns of Burin, Madama, Beita and Huwwara, south of Nablus, searched and ransacked many homes and kidnapped three Palestinians.

It said the soldiers kidnapped Ahmad Tamim, Ahmad Mohammad Omran and Ali Qaddafi Hindi, from their homes in Burin town, south of Nablus.

The soldiers also invaded several communities in the central West Bank district of Ramallah, and kidnapped Ahmad Waleed Sa’adi, Waleed Mohammad Sa’adi, Mohammad Taiseer Nazzal and Ghassan Dablah, all from Jenin, in the northern part of the West Bank.

A former political prisoner, identified as Ramzi al-Qneiri, and Mohammad al-Othman, were kidnapped from their homes in the Jenin refugee camp, in Jenin.

The soldiers also invaded several areas in the southern West Bank district of Hebron, broke into and searched homes and kidnapped at least one Palestinian.

The police did not release the names of the two Palestinians, but only said the officers located a Carl Gustav rifle.