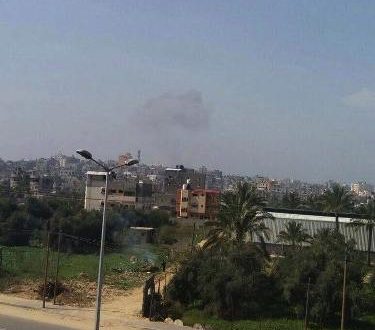 Israeli war jets, on Monday afternoon, have fired rockets towards several areas of the Gaza Strip.

According to locals, Israel fired rockets towards Al-Nsseirat camp, in central Gaza, causing severe damage in the area. However, no injuries have been reported, according to the PNN.

Israel then proceeded to shell the cities of Rafah and Khan Younis, southern Gaza Strip. Shortly after, locals reported strikes on Beit Lahia, north of the Strip.

The attacks are still ongoing.

The last Israeli military aggression on Gaza, in 2014, has resulted in the death of over 2,000 Palestinians in the region, at least 500 of  them children, and the injury of 11,000 others, while some 60 Israelis were killed.

The fire was stopped after Egypt brokered a truce between the Hamas movement and the Israeli occupation, that August.

However, Israel has broken this truce several times, and the Gaza fishermen and farmers are attacked by Israeli forces on an almost daily basis.