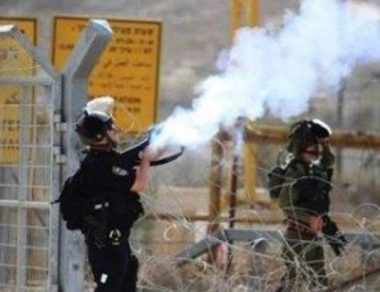 Many armored Israeli military vehicles invaded, on Monday at dawn, the town of Jaba’, south of the northern West Bank city of Jenin, and clashed with local youths, before firing dozens of gas bombs at them, and homes, causing several Palestinians to suffer the effects of teargas inhalation.

Media sources in Jenin said the soldiers invaded a pharmacy in the town, and violently searched it, leading to clashes.

The soldiers fired rubber-coated steel bullets, gas bombs and live rounds, causing many to suffer the effects of teargas inhalation.

In addition, the soldiers stopped and held many cars, and interrogated several Palestinians, in addition to confiscating the ID cards of two siblings, identified as Mahmoud Hammour, and his brother Morad, and summoned them for interrogation.

In related news, the soldiers invaded, overnight until early morning hours, many Palestinian communities in different parts of the occupied West Bank, including occupied East Jerusalem, searched dozens of homes and abducted 21 Palestinians, including a woman who is also a former political prisoner, from Hebron.