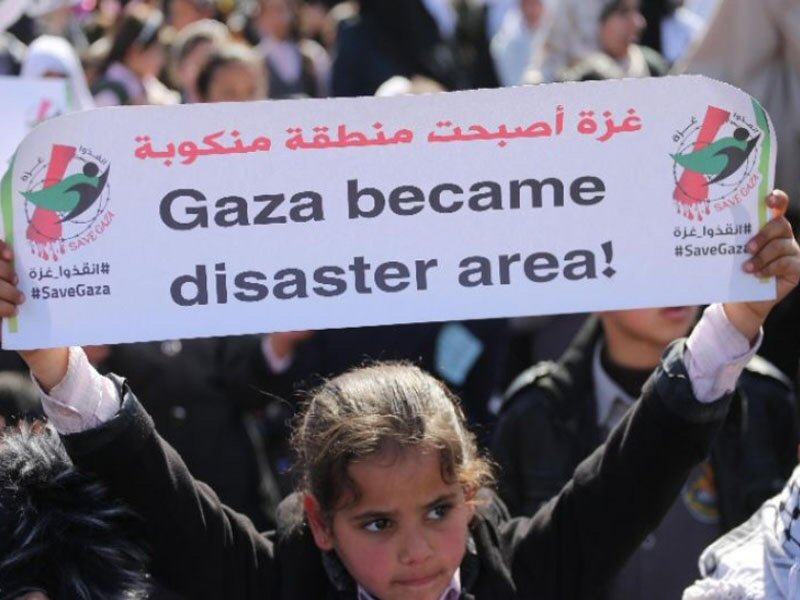 More than 6,000 Palestinian children gathered at Central Square in Gaza City, on Sunday, to call on the world to urgently end the 11-year-old Israeli siege on the coastal enclave.

These children, who have now fallen under three massive Israeli military offensives during the siege, called for the world to help them achieve a “decent life” like other children in the world.

Last week, according to Days of Palestine, the gathering of charities in Gaza announced the Strip is a “disaster-stricken” area, due to the tightening Israeli siege.

Spokesman of the Palestinian Ministry of Health in Gaza, Ashraf al-Qidra, announced the suspension of operations in several hospitals and healthcare centres in Gaza due to the sever lack of electricity and fuel.

Child Ammar abdul-Hamid, 10, said: “[The] Israeli occupation killed my dad. I had been depending on a financial sponsorship for my living. Now, my mom does not have money to spend on our livelihood. Everything stopped due to the Israeli siege.”

Sending his message to the world: “I am calling for all the humans in the world.. Look at us and see our life.. It is unbearable.”

Due to the silence of the world towards the Israeli crimes, he wondered: “What happened to your humanity? Do not you see our miserable life? Have mercy upon us, please!”

‘Israeli siege started prior to my birth’

Shad Qishta, 8, who lost her parents in the 2014 Israeli offensive on Gaza, said: “What is our fault to punished this way? Did not you feel that it is enough for me to live as an orphan?”

The little girl added: “Israel killed my parents and demolished our house. It imposed the siege on us four years before I was born. What are you waiting [for]?”

She continued: “I am sending a message to the Arab and Islamic countries, as well as to the whole world. Where are you? Where is your mercy?”

Regarding the world leaders, she asked, breaking into tears: “Do not you have children? Do you accept that your children have the same life as me?”

Gaza has been under strict Israeli siege since mid-2007. Egypt was complicit in the siege from the beginning, but has tightened its measures against Gaza since the current Egyptian President Abdel-Fattah al-Sisi replaced Mohammed Morsi in 2013.