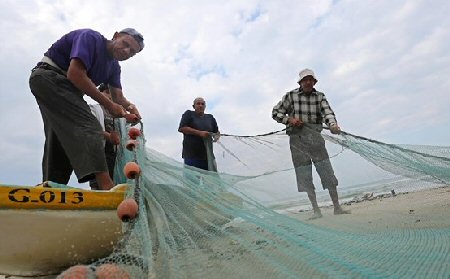 Israeli authorities backtracked on a recent decision and decided, on Tuesday, to reduce the permitted fishing zone, in the besieged Gaza Strip, from 15 nautical miles to only six.

The Israeli navy also chased Palestinian fishermen back to shore, undermining their ability to make a living at sea.

The reason for the reduction remained unknown, at the time of this report.

It is noteworthy that, at the beginning of April, Israeli authorities allowed the expansion of the permitted fishing zone off Gaza’s coast as part of the Egypt-mediated ceasefire agreement between the Hamas movement and Israel.

The Israeli decision was supposed to allow the expansion of the fishing zone to 15 nautical miles.

Palestinian fishermen, who try to make a living off the shores of the blockaded coastal enclave face daily risks, including routine harassment from Israeli naval forces, confiscation of boats and materials, detention and live fire.

Local rights organization, Al-Haq, has documented many cases of Israeli aggression toward Palestinian fishermen off the Gazan coast, calling the Israel’s action against the fishermen “collective punishment” that imposes “difficult economic and social conditions.”

According to the United Nations Office for Humanitarian Affairs (OCHA), in 1994, a permitted fishing range of 20 nautical miles was agreed on between Israel and the Palestinian Liberation Organization (PLO). In practice, Israel only allowed fishing up to 12 nautical miles until 2006, when the fishing zone was reduced to six and later to three.