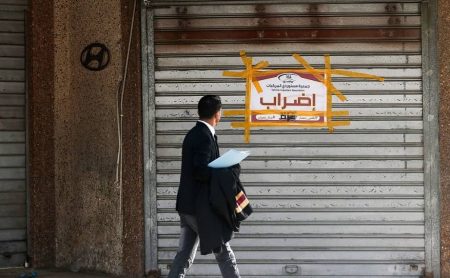 The Gaza Strip, on Monday, is witnessing a general commercial strike in all walks of economic and commercial life, in a protest on the Strip’s economic meltdown, resulting from Israel’s immoral blockade and the Palestinian political split.

President of the Chamber of Commerce and Industry in Gaza, Waleed El- Husary said, according to Al Ray, that the strike comes as a first step in confronting the collapse of the economy in Gaza, holding all officials and international institutions responsible for the slump in all aspects of life.

El-Husary confirmed that the region’s economic indicators are now on hgh alert and an unprecedented level of decline, as a consequence of the high rates of unemployment (46%), poverty (65%), food insecurity (50%), and in addition to the rising number of imprisoned dealers, due to debt default.

He noted Gaza’s private sector institutions have been facing a cruel siege under Israel since 2007, which led to the severe limitation of all Gaza crossings, and imposing a collective punishment on the people of Gaza, as a whole.

The President of the Chamber stressed that he will keep asking Palestinian Authority President Abbas to restore the Palestinian unity between the West Bank and Gaza by ending all traces of the internal division and achieving a national Palestinian political reconciliation.

In turn, spokesman for the Chamber Maher Al-Tabaa said that institutions of Gaza’s private sector sends a distress call to all officials and international institutions to increase public understanding of and warn against the Strip’s inevitable collapse, in accordance with local and international indicators, calling upon them to urgently intervene in preventing the collapse of Gaza from taking place.