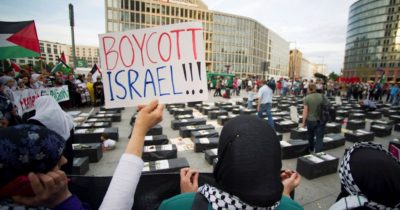 Two right-wing parties in Germany succeeded in getting the German Parliament to pass a bill on Friday condemning the Boycott-Divestment-Sanctions (BDS) movement as ‘anti-Semitic’ in a close vote following a rowdy debate – although the bill is largely symbolic and has no enforcement mechanism.

According to the Times of Israel, “Well before Germany passed landmark legislation condemning the Boycott, Divestment and Sanctions (BDS) movement on Friday, it was clear that the motion, sponsored by two of the country’s largest parties, would pass. All the same, the session was significantly livelier than the one on European economics preceding it. Cheers and jeers (mostly the latter) rang out as MPs argued for and against three competing versions of anti-BDS legislation sponsored by different groups.”

The bill that passed Friday stated that “the pattern of argument and methods of the BDS movement are anti-Semitic”, and added that the German government would not fund or support organizations involved in the boycott of Israeli products and companies.

One of the parties that pushed through the legislation, the AfD party, has been called out for anti-Muslim and xenophobic statements and actions. Members of the party have been associated with neo-Nazi organizations and events.

The other, the Die Linke party, is known to be more centrist-left.

In an interview last year with the ‘Humboldt Three’, two Israeli-German and one Gazan-German activists who were arrested for disrupting a talk by an Israeli official, the activists pointed out, “In Germany, just as in apartheid Israel, the very organizations which claim to promote peace and justice are ironically those leading the assault on human rights whenever it relates to Israel. At the forefront of the campaign to criminalize BDS activists and those who oppose Zionist crimes is the Rosa Luxemburg Stiftung — the PR wing of Die Linke party — which, under the guise of peace and justice, targets human rights defenders as well as abuses the memory of Luxemburg herself.

“In a statement from June 2011, Die Linke refers to BDS as well as to proponents of full equality under a single state as anti-Semites. This laid the groundwork for the criminalization attempt of BDS we are experiencing today, to the dismay of a group of dissident Israelis. Die Linke also escalated its assault on Palestinian rights when it issued a joint statement with several other parties in May 2018, again equating BDS with anti-Semitism.”

The Times of Israel noted that many members of the Jewish and Israeli community in Germany and Israel actually opposed the bill. “An online petition signed by more than 60 Israeli and Jewish academics argued that the “amalgamation” of calls for boycotts with anti-Semitism ‘is wrong, unacceptable and a threat to Germany’s democratic foundation.’

“Some of the signatories — including well-known professors from universities in Tel Aviv, Jerusalem, Haifa, Beersheba, London and Paris — said that while they may dislike BDS, they still ‘reject the fallacious claim that the BDS movement as such is anti-Semitic, and we defend every person and every organization’s right to support it.’”