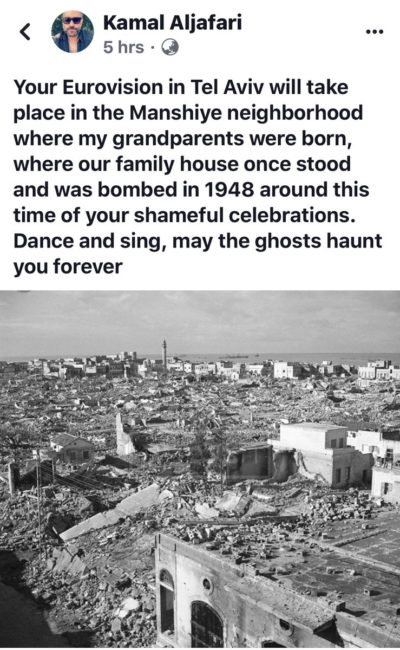 From DazedDigital.com: The Eurovision song contest is a gay institution, an international marquee event affectionately dubbed the ‘Gay Olympics’ – but with Israel hosting this year’s contest, a growing number of LGBTQ+ organisations, groups, journalists, and individuals are joining the call for a global boycott of the hosting state in solidarity with Palestine.

Almost 100 LGBTQ+ groups from around the world have signed an open letter stating their support of Palestine’s call for a boycott, divestment and sanction (BDS) movement against Israel over its historic occupation of Palestine. Among them is London Palestine Action, a network of people in the capital taking creative action against what they call Israeli apartheid.

“Rather than devoting our energy to lobbying MPs or the media, LPA uses creative tools and tactics to make an impact,” explains queer LPA member Laila White to Dazed. “We believe that direct action and civil disobedience are not only effective, but are also necessary to make the changes we want to see. We also believe that using a diversity of tactics makes our movement stronger. So we take action in a variety of ways: through subvertising, music, poetry, art, disruptive direct action and creative protests.”

“Our actions in the past have ranged from shutting down a drone engine factory owned by Israeli arms company Elbit Systems by scaling and occupying the roof for two days during Israel’s summer 2014 massacre of Palestinians in Gaza, to writing parody protest covers of musical acts who break the cultural boycott of Israel, like our series of Radiohead covers by spoof act Some F*cking People.”

LPA’s latest action is a DIY cover of Bucks Fizz’s 1981 Eurovision winning classic “Making Your Mind Up”, under the name Eurodivision. This kind of ‘artwashing’ is a direct response to the Israeli government’s long and storied use of ‘pinkwashing’, meaning, the exploitation of LGBTQ+ identities for public relations purposes. In the Israeli government’s case, this means attempting to shift the global public perception of Israel from one of “apartheid settler state”, engaged in the illegal occupation of Palestine, to that of LGBTQ+ tourist destination, “a harmless, liberal, gay-friendly playground,” according to Pink Watching Israel.

As pro-Palestine activists have pointed out, Israeli pinkwashing positions the country as the ‘only’ safe place for gay people in the Middle East, a kind of queer haven and paradise – or worse, a ‘mecca’, appropriated language that queer Palestinian liberation groups such as ASWAT and alQaws have roundly rebuked – while Palestinian and Arab socities are portrayed as repressive and intolerant in comparison. Global LGBTQ+ networks are used to export this image of inclusivity, while simultaneously quashing and intimidating queer allies of the Palestinian liberation. In 2017, for example, members of pinkwashing group A Wider Bridge disrupted Chicago’s Dyke March, harassing pro-Palestine attendees while donning rainbow star of David flags.

“Any kind of LGBTQ+ liberation supposedly offered by Israel is on the back of Palestinian oppression and is therefore not liberation at all” – Laila White, LPA

Hosting Eurovision in Tel Aviv may be interpreted as a coup for Brand Israel, helping to consolidate their image as a progressive, queer-friendly state. But the boycott has already gained ground, forcing the government to drop its initial condition of hosting the contest in Jerusalem. “This marks a striking failure in Israel’s PR efforts to assert its illegal claim over the city,” say BDS activists.

Across London, bold, queer alternatives to Eurovision are beginning to pop up. Kay Isgay, a long time Eurovision fan, will be co-hosting Pil and Galia Kollectiv’s Euronoize, a punk/DIY event modelled on Eurovision taking place at Scala on May 23. “The event will be livestreamed and with televoting, so you can join in even if you can’t make it on the night.”

Isgay, who identifies as a butch dyke and queer, is a long time fan of the contest. “One of the things I have enjoyed most about Eurovision is what it reveals about gender, sexuality, nation building and politics across the European Broadcasting Union countries. For example, although the rules state that political content in the song lyrics are not allowed, I have loved the way it has still sneaked through. The Ukrainian winner in 2016, Jamala, sang about the oppression of the Crimean Tartars at the height of the Russian annexation of Crimea. In 2015, Armenia was represented by a super group of artists from the Armenian diaspora singing a song about the Armenian genocide. All of this with added sparkle and camp. Amazing!”

I dunno who needs to hear this but if you’ve convinced yourself watching #Eurovision2019 tonight is harmless then you’re wrong. The Palestinian people have asked us to boycott in a show of solidarity and it’s the absolute bare minimum someone can do. #BoycottEurovision2019

1,958 people are talking about this

Winning last year’s contest may be a coup for the Israeli government, but it’s also galvanised the queer arm of the BDS movement, who rightly point out that queer and Palestinian liberation are inseparable. “Liberation for the Palestinian people is not an isolated cause,” says White. “Its part of a broader struggle against colonisation, capitalism, patriarchy, racism and white supremacy, state violence and borders, homophobia, transphobia… queer activists and allies in LPA recognise that any kind of LGBTQ+ liberation supposedly offered by Israel is on the back of Palestinian oppression and is therefore not liberation at all.”

LPA are committed to collective liberation, says White. “Firstly, we think the struggle for Palestinian liberation and queer liberation are intertwined.  Secondly, Israel’s regime of occupation and apartheid doesn’t discriminate – it bombs, imprisons without trial and dispossesses all Palestinians, regardless of their gender or sexuality. Thirdly, Israel’s narrative that it is an LGBTQ+ haven is not even true; there is homophobia and transphobia in Israeli society, just as there is elsewhere, and all its narrative does is risk making the lives of Palestinian queers – who are rendered virtually invisible by its PR – worse, making Palestinian queers’ struggle for gender and sexual liberation harder.”

For Isgay, and an increasing number of Eurovision fans, it’s no longer possible to reconcile Israel’s place in Eurovision. “I was celebrating along with all the other queers when (trans Israeli act) Dana International won in 1998. But as I began to learn more about the Palestinian cause I started to think about how I could remain true to my love of Eurovision and accommodate Israel’s presence in the competition.”

“My actions in this regard were very private and low key, just turning over the channel to avoid engaging with the Israeli song, but last year something changed for me as I noticed the hype surrounding Netta Barzilai’s entry and the strong possibility that Israel would win. I thought I was well placed as a queer who also supports BDS and has been learning for a while about hasbara (a complicated and fraught term employed by Brand Israel to describe their media campaigns) and pinkwashing to start speaking to my friends about these things in relation to Eurovision. And then when Netta won, I felt strongly that I should try and do something to help mobilise action around the 2019 contest. So I made a website so I could talk to my friends and give them something that they could share with their friends too, as a resource.”

“As I began to learn more about the Palestinian cause I started to think about how I could remain true to my love of Eurovision and accommodate Israel’s presence in the competition” – Kay Isgay, Euronoize

Wrong Contest is a diligently compiled primer on pinkwashing and hasbara, and lists the growing number of industrious queer alternatives to Eurovision. “As well as Euronoize, I’m pleased to point people to Eurovision of a Free Palestine, a queer dance party in Bristol where you can find lots of artists and cultural workers making art and music to enjoy instead of the contest this year.”

Globalvision, a recently announced Eurovison alternative featuring Palestinian drag artists and pop singers, will air simultaneously with the contest, live streaming from shows in Dublin, Haifa, London and Bethlehem, while White and their comrades will be out in force for Trash! The Alternative Eurovision Song Contest on May 18th, an LPA fundraiser in Dalston’s Arcola Bar featuring DIY bands and drag acts.

If partying for liberation isn’t your thing, LPA’s micro site lists 10 ways to get involved with the boycott. “For people – queer or otherwise – outside of Palestine, you can sum up the best way to show meaningful solidarity in three short words,” says White: boycott, divestment, sanctions.

“Queer Palestinians are forced to have other priorities than queer liberation by the realities of living under occupation,” points out Isgay. They lack the powerful lobbyists and global, political weight that Brand Israel enjoy. “I support BDS primarily because this is what Palestinians are asking us to do. Economic and cultural boycotts are powerful and can bring about change. It is a non-violent form of pressure that anyone can do, in the face of enormous state power, just by making different choices. It is clear that Israel, like many countries, is moving further to the right. The passing of the controversial Nation State Law last year, Netanyahu’s recent electoral success, the continuation of occupation and illegal settlements all drive me to try and do my bit to protest.”