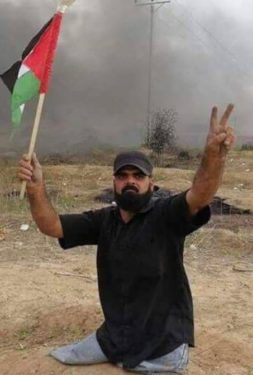 According to the Palestinian Information Center, the Israeli military has closed its investigation into the murder of disabled Palestinian, Ibrahim Abu Thuraya, 29, who was shot and killed by Israeli snipers at a protest near Gaza’s eastern border with Israel, in December 2017.

Eyewitnesses reported that Abu Thuraya was shot in the head, and the Palestinian Ministry of Health reported gunshot wounds sustained in his upper body.

The army had said that Israeli forces use “riot dispersal measures” against the Palestinian protesters with live fire being directed at the lower limbs of the protesters.

Social media platforms showed the young Abu Thuraya, shortly before he was shot, waving a Palestinian flag, sitting in his wheelchair, posing no threat to the armed soldiers.

Abu Thuraya, from al-Boreij refugee camp, was wounded in a 2008 Israeli airstrike on Gaza. Both his legs had to be amputated as a result, but he continued to resist.

In 2017, nine years after losing his legs from the Israeli bombing of his home, Abu Thuraya participated in a protest along Gaza’s border, on December 15, in opposition to U.S. President Donald Trump’s recognition of Jerusalem as Israel’s capital.

Local and international human rights organizations have condemned the Israeli military for lack of a genuine effort to investigate the intentional murder of Palestinians at the hands of Israeli soldiers or settlers.