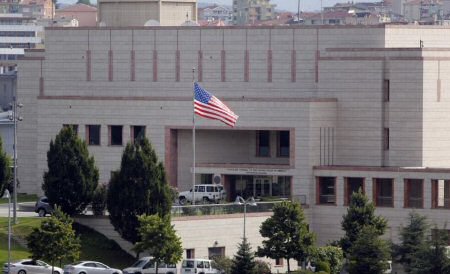 Global Coalition in Support of Al-Quds and Palestine said, Sunday, that any measures to relocate the American Embassy from Tel Aviv to Jerusalem, or to recognize the legitimacy of the occupation over the Palestinian city of Jerusalem are “dull” and will be rejected.

According to Al Ray Palestinian Media Agency, the coalition confirmed in a statement that any American move to recognize illegal Israeli sovereignty over Jerusalem will put the US in confrontations with the Arab and Islamic nations, and will endanger the economic and political interests of the US.

It indicated that the successive US administrations have a huge responsibility for the long-standing injustice against the people of Palestine, pointing out that these administrations have provided unequivocal support for the Israeli occupation of Palestine, denied international resolutions against Israeli practices and policies, and provided a cover to Judaize the occupied city of Jerusalem.

“Moving the US Embassy to Jerusalem contradicts resolutions of the all international organizations, which means that the US is out of the international consensus that doesn’t recognize any Israeli sovereignty over the city, and deals with the Israeli authorities as an occupying entity, not as a legitimate authority, the Coalition added.”

The Global Coalition considers the constant efforts, by the US, to relocate its Embassy to Jerusalem to be blackmail for Palestinians, Arabs and Muslims, in order to pressure them to impose solutions which detract their right to Jerusalem, which, in turn, requires alertness and steadfastness by Palestinian officials,  and both Arab and Islamic governments against this threat.

The coalition stressed that any decision to move the US Embassy to Jerusalem is considered a blatant aggression against the dignity of the Arab and Islamic nations, and will be spurned by all legitimate means.

It called upon Arab and Islamic nations to raise the ceiling for the rebuff of this American decision, asking the League of Arab States and the Islamic Cooperation Organization to make bold positions against the American move of relocating its embassy to Jerusalem, which carries significant implications at various levels regarding the region and the globe.

The coalition urged all parties, institutions, Arab and Islamic bodies, and liberals of the world to take continuous and active measures in various areas to pressure the US administration in order to discourage any actions that would support the American recognition of illegal Israeli sovereignty over Jerusalem.

It called on media outlets, people of law, rights, thought, culture, scientists, and trade union bodies to shoulder their responsibilities in front of the threat of the Arab and Islamic nations’ right to Jerusalem, and to reject any change of facts through threat and pressure by the US.

The Global Coalition concluded its statement by saying, “The Arab and Islamic right to Jerusalem is an imprescriptible right. It is a fact that cannot be distorted, and all history experiences confirm that oppression will be defeated before the power of right.”