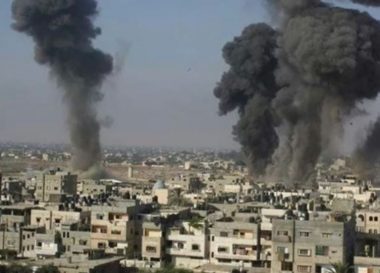 According to al-Akhbar Lebanese News Agency, the Hamas movement in Gaza has informed Egypt that it is willing to reach an indirect deal with Tel Aviv, which includes restoring calm, providing information about Israeli soldiers missing or killed in Gaza since the war in 2014, and other important issues, especially the siege and the economic conditions in the coastal region. Israel is weighing the options for a large-scale invasion into Gaza.

Among the issues Hamas is asking for in return for calm is rebuilding the Airport, and establishing a Seaport in the coastal region. The two issues were part of the 2014 Ceasefire agreement, mediate by Egypt between Hamas and Israel.

It said that Cairo did not grant any promises regarding easing the restrictions on Rafah Border Crossing between Gaza and Egypt, but promised to hold talks with various Arab countries, including the United Arab Emirates, to begin implementing humanitarian projects to help the Palestinians in the besieged and improvised Gaza Strip.

It also said that the main point of discontent was reportedly Egypt’s dissatisfaction with the recent significant improvement in the relations between Hamas and the leadership in Iran, especially since the protest in Gaza, on the last week of Ramadan, carried the name of “International Jerusalem Day” which was held in Tehran.

According to the report, Egypt believes that Tehran is funding the “Great Return March” protests in Gaza, an issue that is coherent with allegations made by the Israeli government.

Nevertheless, Egypt promised to significantly improve the economic condition in Gaza, and to ease the suffering of the Palestinians in the coastal region, while Hamas still believes that Cairo has not provided any comprehensive vision, especially regarding ending the sanctions imposed on Gaza by the Palestinian Authority in the West Bank, the Israeli siege, in addition to the resolving the electricity crises in Gaza, and other important files.

The report also stated that Egypt’s proposals were coherent with recommendation presented by the United Nations, but some of the main issues are the position of the Palestinian Authority in the West Bank, which believes easing the restrictions on Gaza would give Hamas the impression that it can establish its “own state in the coastal region, instead of working to achieve a comprehensive Palestinian unity.”

The other pressing issue right now is Israel’s refusal to ease the sanctions and deadly blockade on Gaza, unless there is something thing in return, including information about the missing soldiers.

Furthermore, Israel’s political and military leaderships are weighing a comprehensive invasion and war against the Gaza Strip, to stop the protests, especially “the launching of burning kites from Gaza into Israeli settlements near the coastal region.”

Eyal Eizenberg, the former head of the Israeli Army’s Home Front Command, criticized the army for “not dealing with this issue effectively.”

He said that Israel should not be worried about entering a new war, and a ground invasion into the Gaza Strip, and added that “if Hamas continues the escalation, it will find the Israeli army operating in the heart of Gaza.”

The former army leader added that summer time is the best opportunity for Israel to wage a war on Gaza, and end all protests.

On his part, Israeli Interior Security Minster Gilad Erdan said that Israel has a big opportunity to launch a massive military invasion into Gaza in the coming months and added that “Hamas does not seem to understand how close Israel is to waging this war, especially after it fired 45 shells into Israeli communities across the border fence, in addition to the fires caused by incendiary kites.”

Israeli Channel Two said the army is preparing for this possibility, and is also deploying more Iron Dome systems, to intercept shells fired from Gaza, amidst increasing possibilities of a serious escalation.

However, the Israeli army said there has been a significant decrease in the number of burning kites flown from Gaza into fields and settlements across the border fence with Gaza.

Israeli reports said at least 20.000 Dunams have been burnt by these kites, flown by protesters in Gaza.

The Hamas movement said the only way for Israel to stop the kites is to completely lift the siege on the Gaza Strip.

It is worth mentioning that the Israeli army has killed 129 Palestinians, including thirteen children, since the beginning of the Great Return March, on Palestinian Land Day, March 30th, 2018.

The army also injured 13672 others, including hundreds who suffered serious wounds, mainly after being shot with the illegal expanding bullets.

Among the slain Palestinians are two medics, identified as Razan Najjar, 22, and Mousa Jaber Abu Hassanein, 36, while 223 medics were injured, and 37 ambulances were damaged by Israeli army fire.