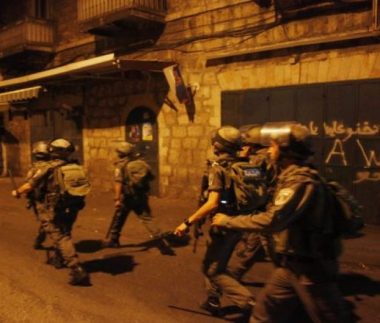 The Palestinian Prisoners’ Society (PPS) has reported that Israeli soldiers abducted, overnight until early morning hours Thursday, twenty Palestinians, including a child, from their homes in several parts of the occupied West Bank, including Jerusalem.

One of the abducted Palestinians is an author, intellectual and human rights activist, former political prisoner Rassem Obeidat.

Obeidat was summoned for interrogation in the al-Maskobiyya detention and interrogation facility and was abducted shortly after arriving there.

He was among several Palestinians who were held, and interrogated, last Monday, after a large police force and intelligence officers invaded a hall of the Ambassador Hotel, in occupied East Jerusalem and attacked a celebration held by the Palestinian Russian Friendship Society.