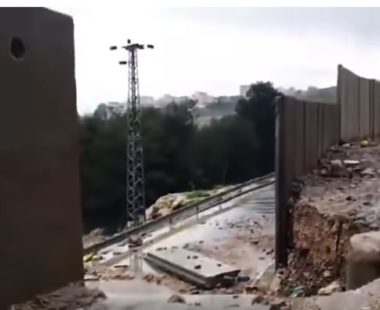 Heavy rain falling over several parts of occupied Palestine has caused sections of Israel’s illegal Annexation Wall near Shu’fat refugee camp, to collapse, in the area which previously witnessed the same occurrence.

The wall has isolated the Palestinians from their confiscated lands and separated them from the segregated Pisgat Zeev illegal colony.

The Wall in that area has isolated large areas of lands, owned by residents of Anata Palestinian town, and Shu’fat, in addition to lands belonging to the Islamic Waqf and Endowment Department located in the valley between the refugee camp and the illegal colony.

The Wall also isolated two soccer and basketball fields, which were used by the Palestinians, especially the students of Anata School.

In addition, the illegal Annexation Wall has also isolated more than 70.000 Palestinians, holders of Jerusalem ID cards, from the occupied city, and living in Shu’fat in addition to the Salam Area, Ras Khamis, Ras Shehada and Anata.