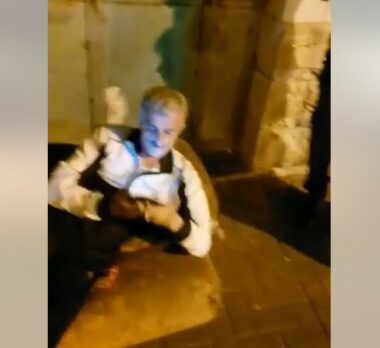 A Palestinian man, identified as Mofeed Sharabati, 55, said that Israeli soldiers refused to allow him to reach his home in the surrounded and isolated Shuhada Street, in the southern West Bank city of Hebron, and added that he has to sleep on the side of the road.

Sharabati lives in the Shuhada Street area in the center of Hebron city, where Israeli soldiers are always deployed and have a permanent military roadblock.

“The neighbors came out and gave me a mattress, bedsheet, and covers so that I can rest after the soldiers informed me that I will not be allowed to go home,” Sharabati stated, “So, here I am sleeping on the sidewalk next to the military roadblock, so close to my home but not allowed to reach it.”

Many Palestinians from the area decided to bring mattresses and sleep next to Sharabati on the sidewalk in solidarity with him and in condemnation of the ongoing Israeli violations.

It is worth mentioning that the Israeli army closed the Ibrahimi Mosque in Hebron, and installed additional military roadblocks to prevent the Palestinians from moving around during the Jewish holidays.

In related news, the soldiers abducted on Tuesday at night a university student, identified as Ja’far Aziz Kayed, from his home in Ramallah, in central West Bank.

His family said their son is still recovering from a surgery he underwent four days ago, and added that he is a student at Birzeit Univerity.