How The Left Also Dehumanizes Palestinians In Gaza 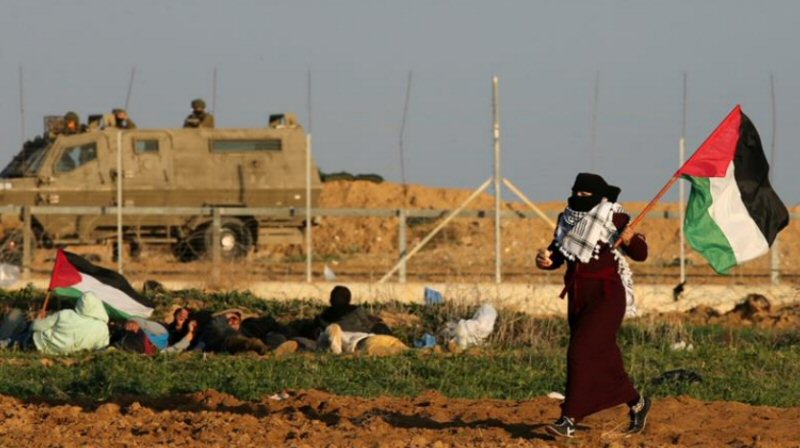 Along the political spectrum, from the far left to extreme right, and spanning racial and ethnic lines, nearly everyone who has something to say about protesters in Gaza seems to fail the task of recognizing Palestinian humanity. If it’s coming from the right, the narrative is of terrorists, rockets and Hamas, a legitimate Palestinian resistance fully cemented as the Boogieman in the western imagination.

From the left, the stories are the stuff of legends, portraying unfathomable Palestinian heroism, courage and “sumud”, an Arabic word romanticized in English to convey epic Palestinian steadfastness.

At both ends of the spectrum, defenseless Palestinians are larger than life, unlike other humans, either superhumanly posing a threat to highly armed soldiers several football fields away, or displaying supernatural courage and fearlessness before near-certain death. The latter narrative, which manages to sentimentalize unspeakable misery is so enticing that even Palestinians have taken up this framing.

Just days ago, I watched a video of a young man who was shot in the legs. He limps along, falls and gets up, only to be shot again. The scene repeats over five or six bullets before the man cannot get up again and others come to evacuate him. The headline and comments extolled the “brave young man” who continued to stand up to his oppressor despite being hit multiple times in his legs.

As a Palestinian mother, I saw something else in that man, young enough to be my son. Maybe he was utterly divested of hope and robbed of the will to live a life encased in the barbaric, malicious, and creative savagery of Israel’s siege on Gaza. A young man who has probably known little more than fear, despair, want, and impotence to do anything. Maybe a young man with nothing to lose, someone already bled of his rightful life, attempting a single moment of dignity in defiance, knowing, and maybe hoping, it would be his last. And maybe this is what the soldier saw, and chose instead to add the trauma of amputated limbs to a tortured man feebly raising a small rock with no will or energy to even throw it.

Maybe his motivation was nationalism. Maybe it was the hope of securing money for his family following his martyrdom or injury. Maybe he thought his death would give his people an inch towards liberty. Maybe it was the only thing left for him to do. We cannot know what is in the hearts of those who put their bodies between bullets and despair. But we can be sure that their motivations are painfully human. There is nothing godlike to see or fetishise.

There is no doubting the courage required to stand up to hateful, murderous Israelis, but narratives that imbue Palestinians with mythical bravery are harmful. They propose an otherworldly ability to withstand what no human should be forced to withstand, and they obscure the very human and very dark reality of life in Gaza, which has led to rates of suicide never before seen in Palestinian society.

Individuals in Gaza have different reasons for joining the Great March of Return, but the prevailing analyses are reductive, often coupling epic Palestinian bravery with non-violent resistance, because western imaginary cannot abide armed resistance, no matter how enduring or merciless the violence inflicted on them. The kind of heroism that is connected with guns is the exclusive purview of western soldiers. The only moral resistance available for the oppressed in the western psyche is exclusively non-violent. This means that the case for Palestinian liberty and dignity collapses the minute we fly an incendiary kite or fire a rocket towards a state that has been eviscerating Palestinian society and Palestinian bodies for decades. We see the same phenomenon around reactions in the United States when Black Americans rise up and do not perfectly conform “peaceful” and “nonviolent” protest, despite the centuries of denigration and marginalization they have endured.

It does not help that even some Palestinians reinforce this notion by dismissing Hamas or downplaying any form of armed resistance as outliers in an otherwise ideal and tidy protest of a preternaturally strong and valiant oppressed people.

Gaza is a death camp

But the truth must be said, and the truth is abysmally ugly and bleak. There is nothing for the world to romanticize in Gaza. Nothing to idealize. Gaza is a death camp. Death and suppression technology is “the Jewish Nation’s” single greatest export and Gaza is the human laboratory where Israeli arms manufacturers fine-tune their wares on the bodies, psyches and spirits of Palestinians. It is a wretched existence that spares none of the two million prisoners in that concentration camp.

Israel has turned Gaza, once a great city at the intersection of trade across three continents, into a black hole of dreams. Gaza is hope’s coffin, an incinerator of human potential, and extinguisher of promise. People can barely breathe in Gaza. They cannot work, cannot leave, cannot study, cannot build, cannot heal. By all accounts, the tiny strip is unlivable, literally unfit to sustain life. Nearly 100 percent of the water is undrinkable. Youth unemployment is so high that it makes more sense to measure employment, which stands at a pathetic 30 percent. Approximately 80 percent of the population lives below the poverty line. Most residents get just a few hours of electricity every day. The sewage system has collapsed. The healthcare system has been stretched to its breaking point and hospitals are closing for lack of vital supplies and fuel, which Israel often prevents Palestinians from buying or even receiving from donors. This ineffable misery is intentional. Israel designed and made it. And the world allows it to persist.

When our lives, resistance and struggle are framed in mythical terms, not only does it obscure our humanity, but it diminishes the depravity of Israel’s control over millions of Palestinian lives. The discourse of sumud set us up for failure at every turn. On one hand, it supposes that Palestinians can endure anything. On the other hand, it suffuses the unuttered assumption that Palestinians deserve to be free because we are good, brave, nonviolent and steadfast.

~ Al Jazeera/Days of Palestine
(edited for the IMEMC by c h r i s @ i m e m c . o r g)
Opinion/analysis 04/02/19 A Dangerous Precedent: US Recognition of Israel’s Annexation of the Syrian Golan