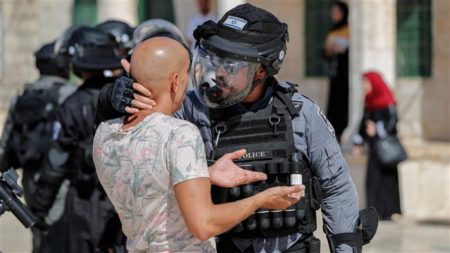 In a 92-page report published on Tuesday, the New York-based NGO said British Mandate-era regulations which still remain in force, in addition to military orders that Tel Aviv has issued since the 1967 occupation of the West Bank, allow the Israeli army to strip the Palestinian people of their basic civil rights.

The report, dubbed “Born Without Civil Rights: Israel’s Use of Draconian Military Orders to Repress Palestinians in the West Bank,” also criticized Israel for unjustifiably relying on those orders to jail Palestinians for anti-occupation speech, activism, or political affiliations, outlawing political and other non-governmental organizations and shutting down media outlets.

“Israel’s efforts to justify depriving Palestinians of basic civil rights protections for more than half a century, based on the exigencies of its forever military occupation just don’t fly anymore,” said Sarah Leah Whitson, executive director of the Middle East and North Africa division at HRW.

“Given Israel’s long-term control over Palestinians, it should at minimum allow them to exercise the same rights it grants its own citizens, regardless of the political arrangement in place,” she added, according to Press TV/Al Ray.

According to the report, Israel’s sweeping military orders apply only to the 2.5 million Palestinian residents of the West Bank, excluding East Jerusalem al-Quds, but not to the more than 400,000 Israeli settlers.

“Nothing can justify today’s reality where in some places people on one side of the street enjoy civil rights, while those on the other side do not,” Whitson noted.

The Israeli orders, the report said, allow imposing prison terms of up to 10 years on civilians convicted by military courts, for influencing public opinion in a way that could “harm public peace or public order.”

A 10-year sentence can also be imposed on Palestinians who participate in a gathering of more than 10 people without a military permit, on any issue “that could be construed as political,” or if they display “flags or political symbols” without army approval,” it added.

Meanwhile, the HRW estimated that between July 1, 2014 and June 30, 2019, the Israeli army prosecuted 4,590 Palestinians for entering what it calls a “closed military zone,” 1,704 for “membership and activity in an unlawful association,” and 358 for “incitement.”

Israeli authorities further rely on military orders to ban 411 organizations, including all the major Palestinian political movements, and to detain people affiliated with them, it added.

“Suspending rights for a short period may temporarily disrupt public life, but long-term, indefinite suspension cripples a community’s social, political, and intellectual life,” the report said. “In cases of indefinite occupation, such as Israel’s, the rights granted to an occupied population should be at least equal to the rights afforded the occupier’s citizens.”

Whitson said the orders give the army “carte blanche to prosecute anyone who organizes politically, speaks out, or even reports the news in ways that displease the army.”

“Israeli military law, in place for 52 years, bars Palestinians in the West Bank from such basic freedoms as waving flags, peacefully protesting the occupation, joining all major political movements, and publishing political material,” she pointed out.

The report was based on 29 interviews, primarily with former detainees and lawyers, reviews of military court indictments, and examination of eight illustrative cases of activists, journalists, and other Palestinians detained under Israeli military orders over the past five years.

It was the first report issued by HRW since Israel expelled the organization’s regional director Omar Shakir, last month

Israel accused Shakir of supporting the Boycott, Divestment and Sanctions (BDS) movement, which calls for exerting financial pressure on the Tel Aviv regime, to end its rights abuses against Palestinians, an accusation the activist and HRW have both denied.