Hundreds Injured, One Seriously, As Colonizers And Soldiers Attack Villages In Nablus, Jenin And Tulkarem 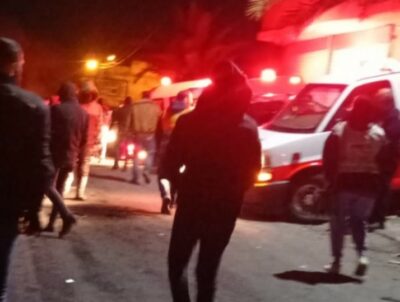 The Palestinian Red Crescent Society (PRCS) has reported, on Saturday at night, that hundreds of Palestinians have been injured, including one who suffered a serious gunshot wound to the head, after hundreds of illegal Israeli colonialist settlers and soldiers initiated ongoing attacks against Palestinian homes in Burqa, Beita, Sebastia, Bazaria, Silat ath-Thaher and other areas in Nablus, Jenin an in northern West Bank.

It added that a pregnant woman suffered the severe effects of tear gas inhalation before she was rushed to a hospital in active labor.

Ehab, a correspondent with WAFA News Agency was shot with a rubber-coated steel bullet, while Fadi, a cameraman working for Palestinian TV, suffered the severe effects of tear gas inhalation in addition to cuts and bruises.

Local mosques in Jenin and Nablus called on the Palestinians to gather for the protection of the families in Burqa and Beita, especially after dozens of illegal Israeli colonizers attacked homes and families, causing many injuries and serious property damage.

Dozens of Palestinians also hurled stones at the invading colonizers and soldiers, wounding one soldier in the face.

The soldiers also directly targeted many Palestinian journalists in Tulkarem by firing live rounds and gas bombs at them while providing live coverage of the ongoing invasions.

In addition, dozens of colonizers attacked many homes in Sebastia town, north of Nablus, and fired live rounds at the Palestinians who rushed to the aid of the families.

The Israeli army said many live rounds were fired from a speeding Palestinian car at a military post near Nablus.

Meanwhile, Israeli soldiers closed many roads and junctions and imposed severe restrictions on the freedom of movement of the Palestinians while at the same time allowing hundreds of fanatic colonizers to march in the area and to head to the site of the former Homesh colony where they started rebuilding and preparing to reestablish the colony on the stolen Palestinian lands. The soldiers also fired a barrage of gas bombs, concussion grenades, and dozens of live rounds at the Palestinians near Sebastia, causing many injuries.