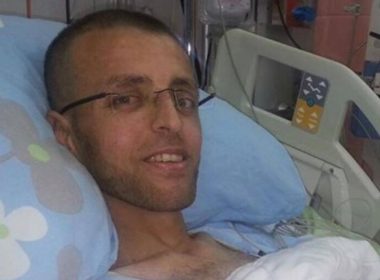 The Palestinian Detainees’ Committee has reported, Wednesday, that the detained journalist, Mohammad al-Qeeq, who entered his second month of hunger strike, protesting his continued illegal detention by Israel, was moved to a hospital after a serious deterioration in his health condition.

The Committee stated that al-Qeeq lost more than twelve kilograms of his bodyweight, is unable to stand or walk on his own, in addition to infections in his eyes, and constant dizziness.

“The detained journalist is determined to continue his strike until freedom, his health is rapidly declining,” the Committee added, “We are calling on all international legal and human rights organizations, and those countries that claim to defend democracy, justice and freedom, to pressure Israel into stopping its ongoing violations and crimes.”

Al-Qeeq was abducted by the Israeli army on January 15, 2117, and started his strike on February 6th, after Israel slapped three-month renewable administrative detention order against him, without charges or trial.

It is worth mentioning that the detainee, a married father of two children, and was repeatedly abducted and imprisoned by Israel, including when he held a 94-day hunger strike protesting his Administrative Detention, and was freed on Thursday, March 16, 2016.