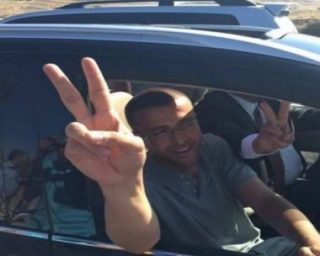 The Palestinian Prisoners Society (PPS) has reported that al-Qeeq, 34, from Doura city, south of the southern West Bank city of Hebron, was released near the Beit Haggai illegal Israeli colony, south of Hebron.

His family, and dozens of Palestinians, waited for him near the Meitar Israeli crossing, south of the ath-Thaheriyya town, near Hebron.

Al-Qeeq declared an open-ended hunger strike on November 25, 2015, protesting his imprisonment under Administrative Detention orders, and the extremely bad treatment he faced, including repeated Israeli threats to keep him held indefinitely, and to subject him to continued torture.

He ended his strike after 94 days after reaching an agreement for his release without preconditions, when the Israeli authorities also agreed to keep him hospitalized until he completes his recovery, and to allow his family to visit with him.

During his strike, al-Qeeq faced very serious, near death conditions, but remained determined to continue his strike until reaching an agreement for his release.

The head of the Palestinian Detainees Committee Issa Qaraqe said the release of al-Qeeq comes due to his determination and ongoing struggle against his unjust, illegal detention, and the massive public support he received.

It is worth mentioning that Israel is still holding captive 750 Palestinians under Administrative Detention, without charges or trial.