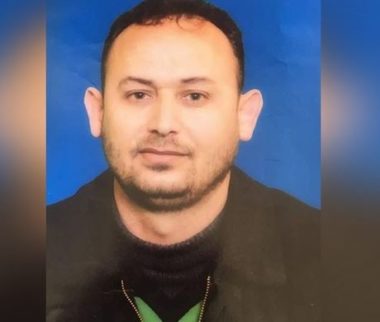 The Palestinian Prisoners Center for Studies has warned that a hunger striking detainee, held by Israel, is facing very serious health condition in the Ramla Hospital, after 56 days of the hunger strike.

The center stated that the detainee, Ahmad Abdul-Karim Ghannam, 42, from Doura town near the southern West Bank city of Hebron, is held under arbitrary Administrative Detention orders, without charges or trial, including an order which was recently issued, holding him captive for two and a half months.

It added that the detainee was previously treated for Leukemia and serious disorders with his immune system, and that there are immediate concerns those conditions could reemerge.

His brother, Nasser Ghannam, said that the army moved his brother to a hospital after 31 consecutive days of the hunger strike, and added that he was scheduled to undergo a marrow transplant surgery before he was taken prisoner.

The Palestinian Prisoners Center for Studies said that Ghannam cannot walk or even stand, in addition to suffering from Hypoglycemia (low blood sugar levels), migraine, abdominal pain, repeated nasal bleeding, and cannot move his left arm, in addition to losing at least 20 kilograms (44 pounds) of his body weight.

After he started his current strike, the Israeli Prison Authority decided to take away 40 days of his detention, and he was supposed to be release on September 6th, however, and despite his medical condition, he was slapped with another Administrative Detention order.

It is worth mentioning that Ghannam is a former political prisoner, who was repeatedly abducted by the army, and spent a total of nine years in prison.