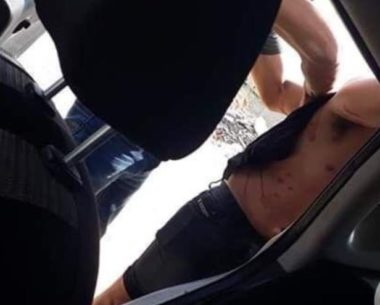 Israeli sources have reported that a 17-year-old Israeli settler was seriously injured, while his father, 60, suffered mild wounds, when a Palestinian stabbed them in Azzoun town, east of Qalqilia, in northern West Bank.

The sources stated that the two were about to enter a Palestinian dental clinic in Azzoun, when a Palestinian approached them and stabbed them.

According to Israel Ynet News, the uncle of the wounded teen who was accompanying him and his father, claimed that the Palestinian “asked if they were Jewish,” to which  he reportedly replied “No, we are Arabs,” before the Palestinian stabbed the father and his son.

The Palestinian Dentist then rushed to help the wounded Israeli teen and his father and provided them with need urgent care.

Israeli soldiers arrived at the scene and moved the wounded Israelis to Eliyahu military roadblock near the illegal Alfei Menashe colony, where they received treatment by Israeli medics and were moved to Meir Medical Center in Kfar Saba.

Ynet added that the Palestinian who assaulted the settler is only 15 years of age, and that he surrendered himself to the local Palestinian security services.

It is worth mentioning that the soldiers abducted the Palestinian dentist and took him to an interrogation facility run by the Shabak, despite statements from the wounded Israeli father who told the army that the dentist defended them and tried to remove the assailant.

Palestinians in Azzoun said the dentist, who studied in Russia, has many Israeli Russian-speaking clients who frequent his clinic.