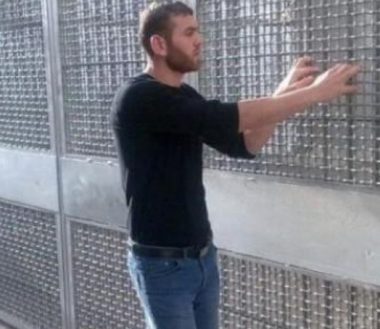 A lawyer working for the Palestinian Prisoners’ Society (PPS) has reported that the Israeli Prison Authority in Asqalan, has transferred a hunger striking Palestinian detainee from its facility to the solitary confinement section of Ohali Kidar prison.

Lawyer Khaled Mahajna said the detainee, Bilal Thiab, 32, went on hunger strike fifteen days ago, and has been subject to constant violations since then.

He added that Thiab even stopped drinking water several days ago to pressure the Prison Authority into moving him to another prion, especially since he was held in a very small, bug-ridden dirty cell, surrounded by Israeli inmates, held for criminal offensives, and continuously shout insults and slurs at him.

The detainee has also been stripped from basic supplies, and is left with a thin torn mattress and sheet, in addition to having to use his own shoe as a pillow.

He is currently held without running water, and has not been allowed to shower or charge his clothes since he started his strike.

It is worth mentioning that Thiab, from Kafr Ra’ey town, near the northern West Bank city of Jenin, was repeatedly abducted and imprisoned, and held a 78-day hunger strike in 20012, protesting being detained under arbitrary Administrative Detention orders, without charges or trial, and was released in August of the same year.

The Israeli army abducted him again on July 14th, 2017, and slapped him with a six-month Administrative Detention order.