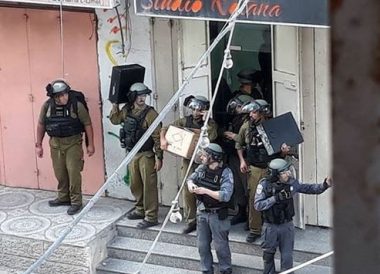 Dozens of Israeli soldiers invaded, Wednesday, many Palestinian homes and stores in Ras Shehada Area, adjacent to Shu’fat refugee camp, in occupied East Jerusalem, search them and abducted a Palestinian after destroying his furniture, in addition to wounding six children.

Media sources in Jerusalem said the soldiers stormed and ransacked many homes in the refugee camp, and abducted Fuad Khatib, after causing damage to his furniture and belongings.

The sources added that the soldiers also invaded several stores, including a photography shop, and confiscated computers.

Following the invasion and the violent searches, many youngsters hurled stones at the army, while the soldiers fired many gas bombs and rubber-coated steel bullets.