“I visited Hebron for the first time, and it was shocking.” 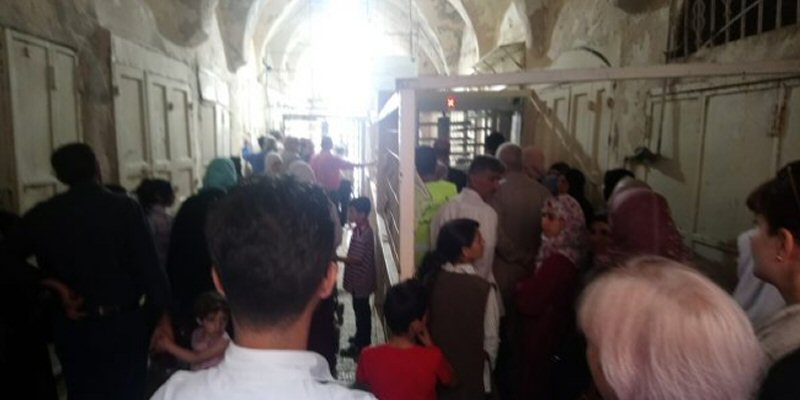 Today, I visited Hebron for the first time. I was apprehensive before going — Hebron is seen as one of the front lines of the occupation, and I had seen videos of clashes there.

Hebron (Khalil in Arabic) is the largest Palestinian city, and the most economically important. Since the 1967 occupation, Israel has constructed settlements there, upping pace in the 90s and 2000s. They surround the city, and occupy parts of the old city centre. There are currently approximately 800 Israeli settlers in Hebron’s old city alone, and over 2000 soldiers.

When we arrived in Hebron, the market, selling Keffiyahs and Hebron glass, was busy with Palestinians and tourists, but only because of Ramadan. Normally, it is so empty that many shops have had to close. Looking up, you can see why. The market is covered by thick wire mesh, on top of which are scattered rocks, rubbish bags and plastic bottles. Overlooking the street are apartments with rolls of barbed wire along the balconies, and an occasional Israeli flag. Here live Israeli settlers, who throw these objects on the market to intimidate, humiliate and ultimately get the stalls to close, crippling Hebron’s economy. In addition, many Palestinian owners are unable to reach their shops in the old city H2 area due to strict Israeli control and heavy taxes.

Higher up, in makeshift watchtowers on the rooftops, stood Israeli Soldiers. It goes without saying that the massive guns they carried weren’t to protect the Palestinians.

At the end of the street, people were gathering around a metal cage-like structure with turnstile: a checkpoint, not separating “Israel” from Palestine, but the market of this Palestinian town from the historic Ibrahimi mosque.

We entered the cage, which was busy and confusing. The turnstile clanged. A lot of people were shouting. Men, women and children were squeezed against each other, including one woman with a baby stroller. At the front of the cage was another turnstile, then a kiosk with a soldier in it. Sometimes he let people through three at a time, or five, or one- it seemed arbitrary. Sometimes he checked ID, sometimes not. This checkpoint was clearly not for “security”. No searches were done, and many people probably passed it multiple times a day to pray : the soldiers would know their faces.

The purpose of this check was to make the Hebronites feel powerless. One old man in the cage asked me “Is this good? Are we dogs, animals to be treated like this?”

We passed through the checkpoint to the mosque, which contains Ibrahim/Abraham’s tomb. After 1994, when Israeli-American Baruch Goldstein fired a machine gun inside the mosque, killing 29 and injuring 125, it has been divided by the military: Jews get 70%, Muslims 30%, and pray with CCTV surveillance and soldiers patrolling the entrance.

The next road was quiet. Along it were groups of soldiers. Our Palestinian guide told us he could not walk here. In front of us stretched a visual representation of Israeli apartheid; Entire streets where Palestinian residents have been evicted, and where soldiers now enforce Israeli-only zones.

The first group of soldiers checked our passports and then waved us on. The street was eerily quiet- the shop fronts shuttered and covered in graffiti with Jewish symbols. Israeli flags hung everywhere. We passed groups of young male settlers in Orthodox attire, some of who carried machine guns.

Under international law agreed by the UN, it is illegal for a state to build settlements for their own citizens in a country they occupy. It is also illegal to have different laws for different ethnicities. This is classed as Apartheid, and even though Israel is constantly breaking international law, the international community has mainly remained silent. Even when there have been votes condemning the settlements, little to no action has ensued.

Inaction is fatal. The morning before I was there, soldiers shot to death an unarmed Palestinian man in the street. He was driving a road-laying truck, and didn’t hear them command him to stop because of its loud engine. If the world remains silent over Israel’s colonisation and apartheid, deaths like this and erosion of rights and land for Palestinians are sure to continue.