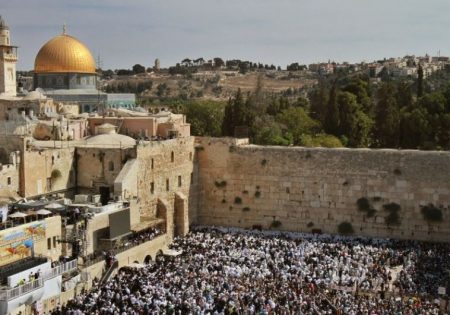 Thousands of Ultra-Orthodox Jews gathered, Wednesday morning, at Buraq plaza, to the west of Al-Aqsa Mosque to celebrate what is called Sukkot, the “Feast of Tabernacles”.

By celebrating their rituals, the celebrants ignored a recent UNESCO resolution declaring the Al-Aqsa shrine an Islamic site, and nullifying a Jewish connection to it.

As Sukkot lasts for seven days, the number of Jews coming to the Islamic holy site will increase during the coming hours, according to Al Ray Palestinian Media Agency.

Temple Mount and Eretz Yisrael Faithful Movement both announced the organizination of a protest march, Wednesday afternoon, starting at Hebron Gate and heading towards the Old City, in Jerusalem. They will gather at Buraq Plaza, calling for the elimination of the Islamic presence at the site, and establishing the alleged “Temple Mount”.