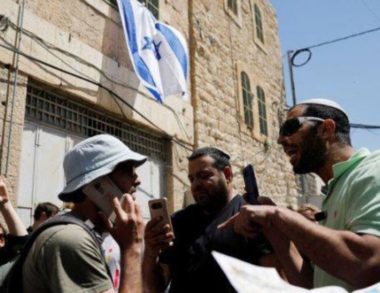 Several illegal Israeli colonialist settlers invaded and occupied, Saturday, a store owned by the Palestinian Ministry of Waqf and Religious Affairs, near the Old Vegetables Market in the Old City of Hebron, in the southern part of the occupied West Bank.

The head of the Hebron Construction Committee, Lawyer Tawfiq Jahshan, told the WAFA Palestinian News Agency that the store, owned by the Waqf Ministry, is rented to Abu Khaled Abu Aisha, and is located behind the Al-Aqtaab Mosque.

He added that the store is also near the illegal Avraham Avino colony, which was installed on private Palestinian lands and property.

After storming the store, the colonists changed its locks, and started altering its appearance.

Representing Abu Aisha, Jahshan stated that he tried to file a complaint with the Israeli Police, but they kept coming up with excuses, and added that he will file complaints  with Israeli courts and follow-up on the matter using all available legal options.