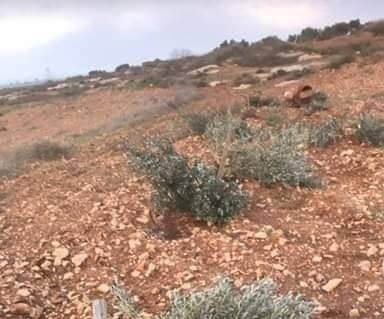 A group of illegal Israeli colonialist settlers invaded, Saturday, a Palestinian olive orchard in the Seder area, in Turmus Ayya village, northeast of the central West Bank city of Ramallah, and uprooted dozens of olive trees.

The colonists invaded the Palestinian orchard and cut the trees although the land is just a few meters away from an Israeli military observation post overlooking it and the surrounding areas, media sources said.

They added that the farmers filed a complaint with the Israeli army and police, and that the soldiers were already in the invaded lands when the Palestinian owners arrived and saw the damage.

Such attacks and violations against the Palestinian lands have been seriously escalating, while the military fails to apprehend or conduct a serious investigation into the ongoing assaults.

The violations carried out by the illegal colonialist setters include cutting, uprooting and burning trees, flooding orchards and farmlands with wastewater, in addition to attacks against the Palestinians, their homes and cars, in addition to racist graffiti and the defacing of graveyards and holy sites, including, burning or attempting to burn mosque and churches.