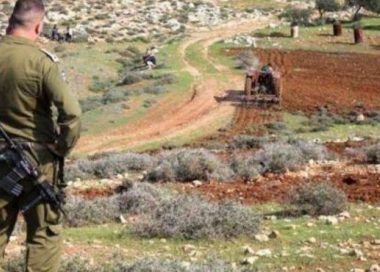 Ghassan Daghlas, a Palestinian official who monitors Israel’s illegal colonialist activities in northern West Bank, said the colonists brought a bulldozer and other equipment to uproot the Palestinian lands.

He added that the invasion targeted Basin #1, also known as the al-Kharroub area of ‘Asira al-Qibliya.

The latest violation and assault is part of numerous attacks against the Palestinians and their lands in that area, especially since the settlers aim at expanding their illegal colony of Yitzhar, which was built on private Palestinian lands.

On Tuesday,  Israeli soldiers  destroyed a number cactus seedlings belonging to a Palestinian resident of the northern Jordan Valley.