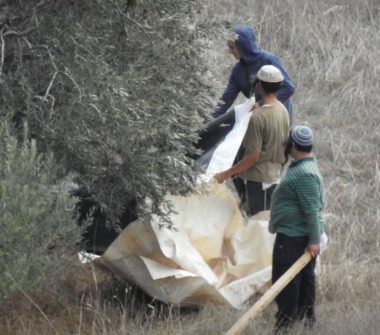 In yet another attack, one of the numerous invasions and violations, a group of extremist Israeli colonists invaded, Sunday, Palestinian olive orchards owned by villagers of Jeet, east of the northern West Bank city of Qalqilia, and harvested dozens of trees, stole the produce, and sprayed many trees with toxins.

The Israeli assailants, who came from the illegal Kidumim colony, which was built on private Palestinian lands, also cut many trees.

Lawyer Omar Yameen, an owner of an orchard in the area, said he was shocked to see the destruction caused by the colonists to his land, especially since the attackers illegally harvested his trees, and then sprayed them with chemicals.

He added that one of the colonists, who illegally lives in an RV near his land, has also flooded the orchard with sewage water.

Yameen stated that these violations aim at the destroying the only source of livelihood to dozens of families, to force them out and illegally annex their lands.

The orchards are isolated behind the Annexation Wall, and the Israeli authorities only granted the Palestinians four days to pick their olive trees, which is not enough to harvest them.

The villagers in Jeet own more than 500 dunams of lands that became isolated behind the wall, but Israel only allowed them into their orchards during the olive harvest season, under very strict conditions, while the colonists have an easy, unrestricted access.

On Saturday at dawn, Israeli colonists invaded,  a Palestinian olive orchard, owned by a villager from ‘Awarta, east of Nablus, and harvested many trees before steeling the produce.