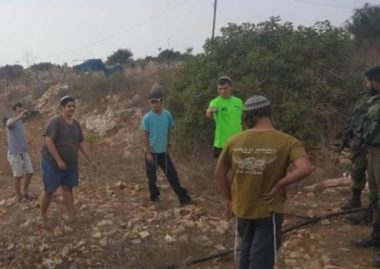 A group of extremist Israeli colonists attacked, on Friday evening, a family and several international solidarity activists, on a Palestinian olive orchard in Kafr ed-Deek town, west of the central West Bank city of Salfit.

Palestinian farmer, Mohammad Taha, told the Maan News Agency that he, along with his wife and children and several international peace activists, were picking their olive trees in his orchard, when a number of colonists assaulted them.

Taha added that the assailants came from the illegal Bruchin colony, and assaulted him, his family and the international volunteers while shouting and cursing at them.

“This is our land, so we refused to leave, and we countered their invasion and aggression,” he said. “The Israeli assailants tried to strike us with clubs and batons, and attempted to prevent us from picking our olive trees.”

He also said that the colonists started harvesting some of the olive trees, and stole their produce, before they were stopped.

Taha stated that Israel has been trying to confiscate the remaining approximately 30 olive orchards in the area, and installed many surveillance cameras.

“Every time we enter our lands, the colonists attack or try to attack us,” he added, “But we are here to stay, steadfast on our lands and will not allow them to take them away.”

It is worth mentioning that Israel soldiers came to the lands shortly after the attack started but seemed to be there just to ensure no colonists are harmed, instead of removing them.

On Saturday, Israeli colonists chopped 25 olive trees belonging to Palestinian farmers in the village of Nahhalin, east of Bethlehem in the West Bank.

On Wednesday, illegal colonists attack from Mabo Dothan outpost, which was built on Palestinian lands in Ya’bad town, west of the northern West Bank city of Jenin, attacked many Palestinians picking olive trees in their orchards.

Several days ago, the colonists also invaded Palestinian orchards in Qaryout village, south Nablus, in northern West Bank, and forced the residents out, for the fourth consecutive day.

In addition, a group of colonists attacked Palestinian orchards near Salfit, before steeling ladders, olive picking equipment, and mattresses.

The attacks come while groups of illegal Israeli colonialist settlers continue to invade Palestinian olive orchards, cut trees and assault the villagers, in several parts of the occupied West Bank. These assaults and violations always escalate during the olive harvest season.