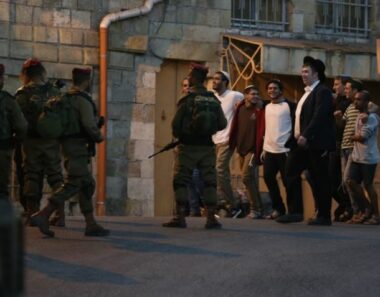 A group of fanatic illegal Israeli colonists attacked, on Saturday night after midnight, several Palestinian homes the al-Odaisah village, east of the southern West Bank city of Hebron, and threatened to kill the residents.

Media sources in Hebron said the colonists attacked the homes, hurled insults at the families, in addition to threatening to kill them and burn their homes to the ground.

The village is part of Sa’ir town, east of Hebron, and is subject to repeated violations by the soldiers and the colonists.

The soldiers stopped and searched dozens of Palestinian cars, and interrogated several residents while inspecting their ID cards.

On Saturday, a group of illegal colonists attacked a Palestinian journalist, identified as Mohannad Mustafa Qfeisha, 28, in Tal Romedia neighborhood, in the center of Hebron city, causing cuts and bruises.