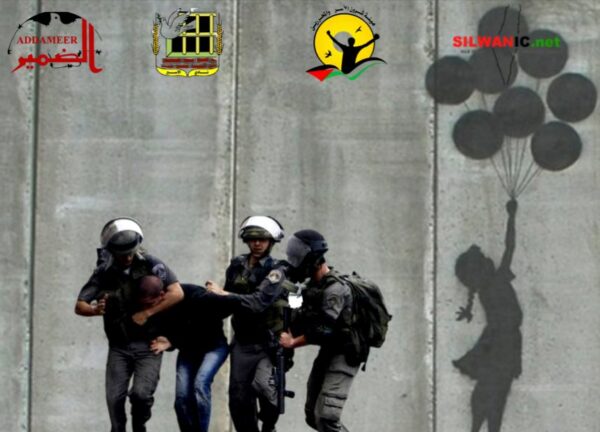 A report issued by several human rights and information centers groups in occupied Palestine stated that Israeli soldiers abducted at least 413 Palestinians, including 49 children and seven women, in the occupied territories in November.

The Palestinian Detainees Committee, the Palestinian Prisoners Society and the Ad-Dameer Prisoner Support and Human Rights Association, and Wadi Hilweh Information Center in Silwan (Silwanic), issued a fact sheet, based research and documentation, revealing the number of Palestinians abducted by the Israeli occupation army in November.

They said the soldiers abducted 157 Palestinians in occupied Jerusalem, 40 from the Ramallah and al-Biereh governorate, 74 in Hebron, 31 in Jenin, 33 in Bethlehem, 30 in Nablus, 18 in Tulkarem, 18 from Qalqilia, 3 in Jericho, 7 in Tubas, 1 in Salfit, and one from Gaza.

The report indicated that the number of Palestinian detainees imprisoned by Israel is about 4400, including 41 women, 170 children, and 380 who are held under the arbitrary Administrative Detention orders, without charges or trial.

Also in November, Israeli courts issued 102 Administrative Detention orders; 47 of them were issued against the detainees for the first time, and 55 were renewed orders.

In a recent report, the Palestinian Information Ministry has confirmed that Israeli soldiers have killed seven Palestinian children in the West Bank and the Gaza Strip, since the beginning of this year.

The latest casualty was Ali Ayman Abu Alia, 14, who was shot and killed by the soldiers in his village of al-Mughayyir, northeast of the central West Bank city of Ramallah.

It is worth mentioning that, on Friday December 11th, a deaf and mute Palestinian man, identified as Nasser Halawa, 47, from Nablus in northern West Bank, died from serious wounds he suffered on August 17th, after Israeli soldiers shot him at the Qalandia Terminal, north of occupied Jerusalem.

The Palestinian children, who were killed by Israeli army fire in 2020 are: