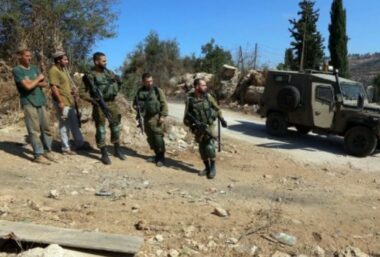 A group of illegal fanatic Israeli colonists attacked, Saturday, a Palestinian journalist in Hebron city, in the southern part of the occupied West Bank, causing cuts and bruises.

They added that the journalist was kicked and beaten to several parts of his body, especially his head, resulting in numerous cuts and bruises.

Qfeisha is a Palestinian journalist who works for Palestine Sports TV and was just walking in the area when the Israeli colonists assaulted him, in front of Israeli soldiers.

The Israeli assailants came from the illegal Ramat Yishai and Beit Hadassah colonies, which were installed on private Palestinian property in the heart of Hebron city.