Soldiers Injure Several Palestinians, Cause Damage To One Home, In Kufur Qaddoum 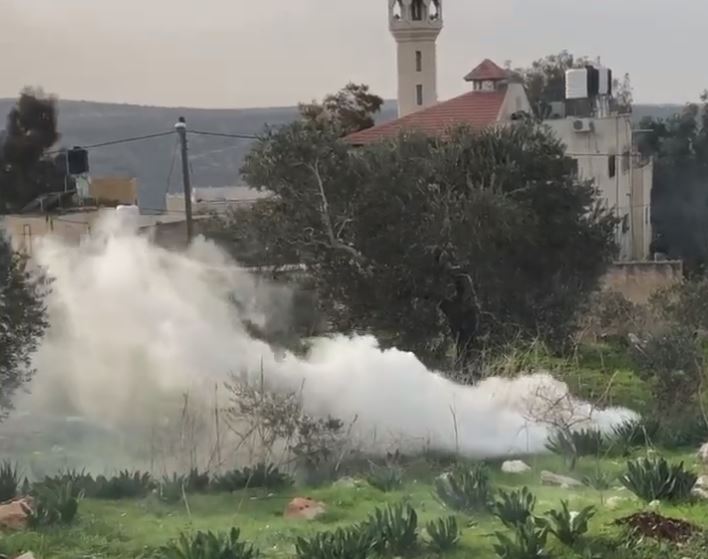 Israeli soldiers injured, on Saturday evening, several Palestinians during the weekly procession in Kufur Qaddoum, east of Qalqilia, in northern West Bank, and caused severe damage to the interior walls of one home after storming it and forcing the family in one room.

Morad Eshteiwi, the coordinator of the Popular Committee in Kufur Qaddoum, said the soldiers invaded the village, before storming a home, and forced the family in one room for more than four hours, in addition to occupying its rooftop to use it as a firing post.

Adnan Ali, the owner of the home, said the soldiers held his twelve family members in a room on the ground floor of the building, before demolishing some interior walls using handheld tools, resulting in excessive damage.

The soldiers also fired many rubber-coated steel bullets, gas bombs, and concussion grenades at the Palestinians, while some youngsters hurled stones and empty bottles at them. One Palestinian, 19 years of age, was shot with a rubber-coated steel bullet in the leg, while dozens of residents, including those in their homes, suffered the effects of teargas inhalation.

It is worth mentioning that the soldiers have been invading Adnan’s home every week to occupy its rooftop and open fire at the protesters.

On Friday, the soldiers also invaded the village and attacked the weekly procession, held every Friday and Saturday, causing dozens of Palestinians to suffer the effects of teargas inhalation.

The army also invaded and searched homes, and occupied their rooftops to use them as firing posts and monitoring towers.

Kufur Qaddoum and surrounding areas have been protesting the closure of the main road, by the Israeli occupation authorities, in 2003. The road, no longer accessible to Palestinians, is now exclusively used by illegal Israeli settlers from nearby colonies.