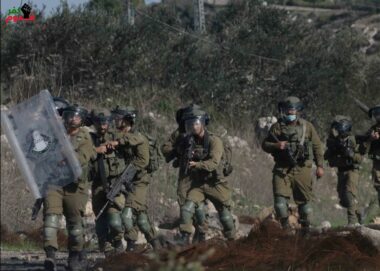 Morad Eshteiwi, the coordinator of the Popular Committee against the Annexation Wall and Colonies in Kufur Qaddoum, said dozens of soldiers invaded the town, before storming homes and occupying their rooftops.

He added that the soldiers fired a barrage of gas bombs, causing scores of Palestinians to suffer the effects of teargas inhalation.

This week’s procession was held in commemoration of the 33rd anniversary of the “First Intifada,” and sixth anniversary of the death of Palestinian government minister, Ziad Abu Ein, who served as the head of the Wall & Colonization Resistance Commission, when Israeli soldiers killed him during a nonviolent procession.

The residents also marched in condemnation of the killing of Ali Ayman Abu Ata, 15, who was shot by the soldiers on December 7, 2020.

The Palestinians called for continued massive protests in occupied Palestine, to condemn the ongoing Israeli occupation, and its escalating violations.

Kufur Qaddoum and surrounding areas have been protesting the closure of the main road, by the Israeli occupation authorities, in 2003. The road, no longer accessible to Palestinians, is now exclusively used by illegal Israeli settlers from nearby colonies.