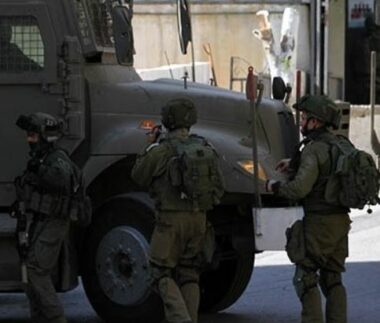 Israeli soldiers abducted, on Sunday at dawn, five Palestinians, including former political prisoners, from Bethlehem, south of occupied Jerusalem in the West Bank, and two near Jerusalem.

In addition, the soldiers invaded and searched homes in the al-‘Ezariya and Abu Dis towns, southeast of occupied Jerusalem, before abducting Ata Maher Hamdan, 20, and Yazan Khaled Mheisin, 20.

In related news, a report issued by several human rights and information centers groups in occupied Palestine stated that Israeli soldiers abducted 413 Palestinians, including 49 children and seven women, in the occupied territories in November.

In a recent report, the Palestinian Information Ministry has confirmed that Israeli soldiers have killed seven Palestinian children in the West Bank and the Gaza Strip, since the beginning of this year.

The latest casualty was Ali Ayman Abu Alia, 14, who was shot and killed by the soldiers in his village of al-Mughayyir, northeast of the central West Bank city of Ramallah.

It is worth mentioning that, on Friday December 11th, a deaf and mute Palestinian man, identified as Nasser Halawa, 47, from Nablus in northern West Bank, died from serious wounds he suffered on August 17th, after Israeli soldiers shot him at the Qalandia Terminal, north of occupied Jerusalem.