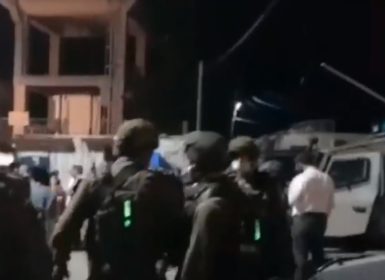 They added that several colonists also climbed on the rooftops of several homes, while others forced many stores to close.

Israeli soldiers also invaded the village, and did not attempt to stop the attack by the illegal colonists, but instead forced the Palestinians away.

The invasion and vandalism, carried out by the armed settlers, took place near ancient Islamic tombstones in the village.

Eyewitnesses said that the assailants attempted to attack those ancient sites, as they assaulted nearby Palestinian homes and stores.

Such violations on Palestinian property, holy sites, and graveyards in the area have escalated over the past several months.

In the occupied West Bank, including occupied East Jerusalem, Israel has built dozens of Israeli colonial settlements, home to more than 600,000 Israelis.

All of Israel’s colonies are illegal under International Law, the Fourth Geneva Convention, in addition to numerous United Nations and Security Council resolutions.