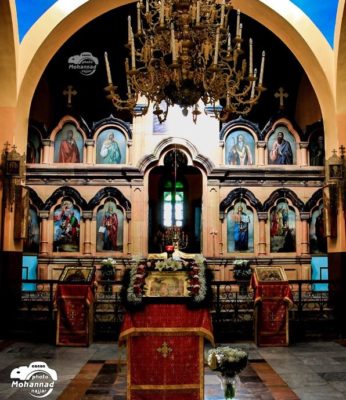 A group of fanatic Israeli colonialist settlers stormed, on Monday at night, the al-Maskobiyya Church, known as Abraham’s Oak Holy Trinity Monastery, in Hebron city, in the southern part of the occupied West Bank.

Eyewitnesses said dozens of illegal colonists, accompanied by a large military force, invaded the Christian Monastery while chanting and singing, before holding prayers in the church.

The Monastery, located in the al-Jilda Street in Hebron city, in an area that falls under the complete control of the Palestinian Authority.

All of Israel’s colonies in occupied Palestine, including those in and around occupied Jerusalem, are illegal under International Law and the Fourth Geneva Convention, and constitute war crimes.

Also, Article 49 of the Fourth Geneva Convention states: “The Occupying Power shall not deport or transfer parts of its own civilian population into the territory it occupies.” It also prohibits the “individual or mass forcible transfers, as well as deportations of protected persons from occupied territory”.