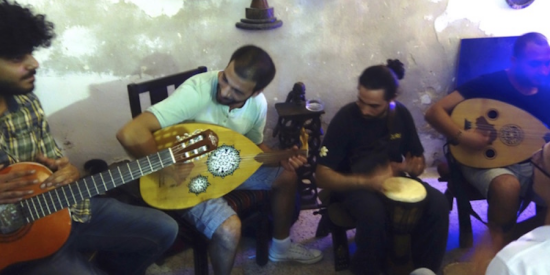 Star Street is one of Bethlehem’s oldest commercial streets and a UNESCO World Heritage Site. The street begins at the site of King David Wells, winds through historic quarters of Bethlehem, merges with Manger Street and eventually reaches the Church of the Nativity. Religious pilgrims have long taken the road to reach the Church of Nativity.

A vision of what should be: a bustling Star Street on Saturday evening of Bethlehem Live.

Star Street was once the busy centre of Bethlehem’s Old City. However, the path’s local businesses have struggled to survive since the Second Intifada, when the Israeli government severely restricted movement in and out of the city. Israel’s construction of the apartheid wall, which severed Bethlehem from Jerusalem, further challenged Star Street’s economic vitality. Said Zarzar, the artistic director of Bethlehem Live and a resident of Star Street, explained to the Alternative Information Center that since the Second Intifada, 128 shops have closed down in the area.

The festival revived Star Street for four nights. Zarzar explained that with Bethlehem Live, “we are creating… an identity for this street.”

Members of the al-Hara Theatre Company hold massive puppets of a man and a woman in traditional Palestinian dress at Bethlehem Live.

The festival showcased a variety of musical acts, political lectures, interviews and pop-up vendors. Many local and international volunteers, musicians, artists and attendees helped bring the festival to fruition.

Haneen Hanna and Mohamad Hahsiry, two local artists at Bethlehem Live, said “we want people to ask questions and for visitors to learn about the history of this street.” “We do not charge much for the pictures” they added, “the most important thing is the exchange of ideas.”

Clowning around: volunteer performers strike a pose, armed with face paint and balloons at Bethlehem Live.

Some bands and speakers travelled to Palestine from as far as the U.S. and Japan to attend this year’s festival, including the U.K. band Mumford and Sons.

Zarar said that bands from abroad “come with little help from the festival financially” and generally “fund themselves [to] come here to stand in solidarity with the Palestinian people [and] say ‘we are with you.'”

Alize Yaccino, U.S., performs with her ukulele on the main stage at Bethlehem Live.

This diverse range of participants brought along with them diverse expressions of solidarity with the Palestinian people, such as the Horishima Memorial Day event from Japan.

Even after the festival closed down for the night, local musicians and visitors continued to play and sing in the temporary cafes, carrying the spirit of Star Street throughout the night.

Local musicians play in one of the temporary bars on Star Street after the festival has finished for the evening.

Abed, a young volunteer from Bethlehem, affirmed that this year’s festival brought much “happiness and life” to Star Street. He added that the festival’s atmosphere must continue throughout the year, however, as “tomorrow these streets will be dead.”

Poppy Liuba-Carmichael studies Arabic and Social Anthropology at the University of Edinburgh.