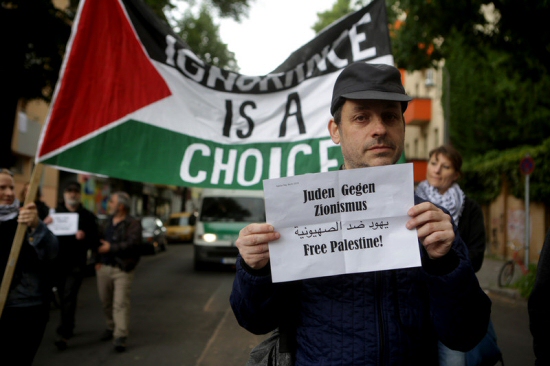 photo: With Palestine solidarity activism in Germany gaining more visibility, the backlash against it has increased. (Anne Paq/ActiveStills)

The Holocaust was the first historic event that touched my inner core as a human being. Perhaps this explains my early fascination with everything Jewish.

In the 1990s, I lived for two years in Israel, where I volunteered in a center for adults with special needs. This was part of my German Zivildienst — a civilian substitute for conscientious objectors to then compulsory military service. I was what I now consider a naive, well-intentioned, liberal Zionist.

It was not until I read Ilan Pappe’s 2006 book The Ethnic Cleansing of Palestine that I realized Israel’s establishment involved the expulsion of 750,000 indigenous Palestinians.

Chancellor Angela Merkel has said the “security of Israel is part of Germany’s reason of state.” All German governments since the Second World War have taken a similar line.

In Germany, activism for Palestinian rights has been largely ignored for decades. Demonstrations, talks, pamphlets, books highlighting the Palestinian plight — all were pushed under the carpet.

The Palestinian call for boycott, divestment and sanctions — or BDS — has been a total game changer in this respect…