Including A Child, Israeli Soldiers Kill Two Palestinians In Jenin 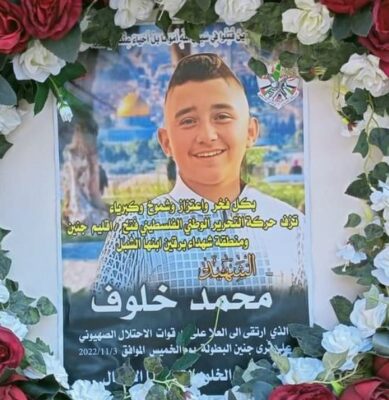 On Thursday, Israeli soldiers killed two Palestinians, including a child, and injured at least four others, in Jenin and Jenin refugee camp, in the northern part of the occupied West Bank.

It added that the Palestinian was rushed to Jenin governmental hospital but succumbed to his profoundly serious wounds.

The Palestinian News & Info Agency (WAFA) said Farouq was engaged, and his wedding was scheduled to be held Saturday.

The Israeli army said it invaded the Jenin refugee camp to arrest Farouq, a member of the Al-Quds Brigades, the armed wing of the Islamic Jihad, before exchanging fire with him and other Palestinian fighters.

The Israeli army was also trying to abduct another Palestinian in the Jenin refugee camp but were unable to do so due to the fire exchange and withdrew from the area.

The soldiers also killed a child, Mohammad Samer Khallouf, 14, from Burqin town, west of Jenin, after shooting him with live fire in Jenin refugee camp.

The Palestinian was shot after many army vehicles invaded Jenin and Jenin refugee camp and surrounded a shop, leading to protests, before the army fired a barrage of live fire.