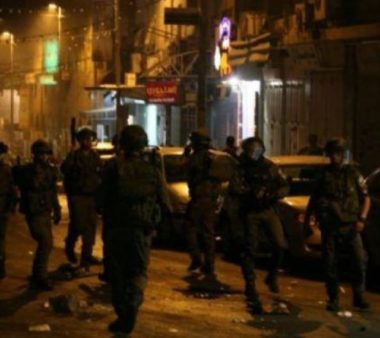 The Palestinian Prisoners’ Society (PPS) has confirmed that Israeli soldiers abducted, on Wednesday at dawn, fifteen Palestinians, including two children and the mayor of Beit Kahil town, in the occupied West Bank.

The PPS said the soldiers stormed and violently searched dozens of homes across the West Bank, and interrogated many Palestinians while inspecting their ID card.

It added that the soldiers also abducted Bara’ Tawfiq Mahmoud, from his home in Siris village, south of Jenin, and Khalil Mohammad al-Qarm, from Jilqamous village, east of Jenin.

In Nablus, in northern West Bank, the soldiers abducted Salahuddin Dweikat, from his home in Askar refugee camp, east of the city, and a former political prisoner, identified as Saher Jaber Hamayel, from Beita town, south of Nablus.

Furthermore, the soldiers abducted Mahmoud Ghannawi, 40, and Abdul-Hadi Shbeita, 35, from their homes in Azzoun town, east of the northern West Bank city of Qalqilia.

In Ramallah, in central West Bank, the soldiers invaded and searched homes in Birzeit town, north of the city, and abducted Ahmad Abdul-Karim Qa’ad, 33.

In Hebron, in southern West Bank, the soldiers invaded Beit Kahil town, northwest of the city, and Beit Ummar town, north of Hebron, searched homes and abducted five Palestinians, including a mayor and a former political prisoner.

The soldiers also installed roadblocks on roads leading to the al-Fawwar refugee camp, and the ath-Thaheriyya town, south of Hebron, in addition to Ethna town, west of Hebron, before stopping and searching dozens of Palestinian cars, and interrogated many residents while inspecting their ID cards.

Furthermore, the army invaded and searched many homes in the southern area of Hebron city, and interrogated several Palestinians.