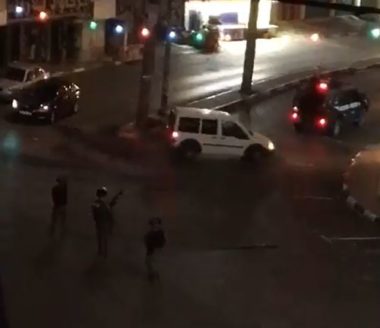 Israeli soldiers injured, on Saturday evening, 46 Palestinians, including children, after the army invaded the al-‘Ezariyya town, east of occupied East Jerusalem, leading to protests, and fired many gas bombs at protesters and many surrounding homes and cars.

The Palestinian Reds Crescent Society (PRCS) said one child, was directly shot with a gas bomb to her head and was rushed to a medical center in Abu Dis nearby town, before she was moved to Hadassah Israeli medical center for further treatment.

The PRCS added that six members of the same family suffered the effects of teargas inhalation, while in their car, and received the needed treatment.

Local sources said the invasion and protests first started in al-Qanatra Bridge area, before spreading to the rest of the town, and that the soldiers also surrounded the area of al-Aziz Mosque, and fired a barrage of gas bombs and concussion grenades.

The PRCS said its medics provided treatment to at least 40 Palestinians, mostly due to the effects of teargas inhalation, and some who were physically attacked by the army, in addition to a few who fell while the soldiers were chasing them.