Including One Woman, Israeli Soldiers Abduct Two Palestinians In Jenin 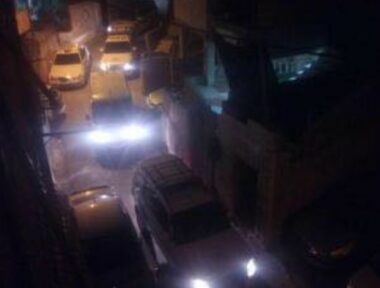 Israeli soldiers abducted, on Wednesday at dawn, two Palestinians, including the wife of a political prisoner, in the Jenin governorate, in the northern part of the occupied West Bank.

The Jenin office of the Palestinian Prisoners’ Society (PPS) has reported that the soldiers invaded the al-Fandaqumiya village, southwest of Jenin, searched homes, and abducted a woman, identified as Ghadeer Adnan Qarariya.

The PPS added that Ghadeer is the wife of Malek Fashafsha, 20, who was abducted by the soldiers last month and is still imprisoned without charges.

In addition, the soldiers abducted Ahmad Salah Abu Rmeila, from Ya’bad town, west of Jenin, after stopping him at the nearby Dotan military roadblock.

Also at dawn, the soldiers shot a young Palestinian man, and abducted another, in two separate incidents in the central West Bank city of Ramallah.

On Tuesday night, the soldiers killed a Palestinian man, identified as Raed Yousef Rashed Jadallah, 39, in the western area of Beit Ur at-Tahta, west of Ramallah, after the army attacked Palestinian workers in a crossing area of the Annexation Wall.